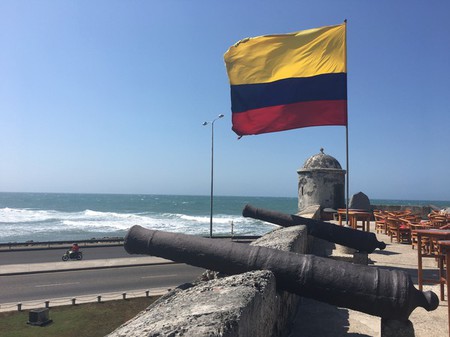 On our way from the ABC Islands to Panama we stopped in Columbia to get to know the country and it’s peoples as well as getting some work done on Moya. With the trade winds at their peak force we had a bumpy ride from Curacao to Santa Marta. Here we cleared into the country and spend a week exploring the Sierra Nevada (unfortunately the Taragona national park was closed), enjoying the carnival in Baranquilla, the columbian way and waiting for lighter winds. During night time it gusted up to 50 kt in the marina straight from the mountains close by. During the day winds decreased a bit to around 30 kt sustainable winds. According to locals this wind phenomenon usually is experienced for 1-2 weeks around Christmas, but this season already started early December and according to whether forecasts would continue at least for two more weeks. The exceptional wind force over a duration of several weeks caused severe damages to the marina, which were constantly repaired by the welcoming staff. As we arrived in Santa Martha during the night, we did not dare to enter the marina or anchor in unknown troubled waters. We sailed 3 miles further south and anchored in the Rodandreo bay, which is better protected from the heavy winds. 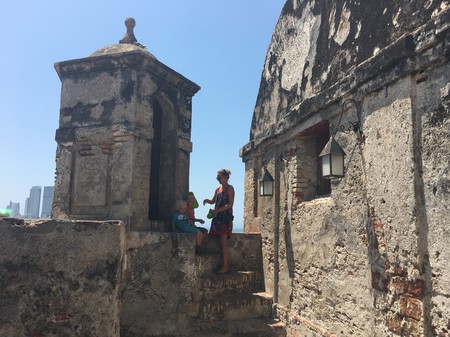 After a bit more than a week with unchanged winds, we decided to continue our voyage towards Cartagena as soon as winds allow to leave the marina. As we wanted to avoid increased winds and swells during the night, we started as early as wind calmed a little down and made for Puerto Velero. We crossed the delta of Rio Magdalena approximately 5 miles off score with gale force winds and 4-5 meters swell from the aft. The ocean turned brown, smelled earthy and the significant waves heights increased even further. We rounded Punta Morro Hermosa after sunset and arrived through a well lit passage in Puerto Velero, where we anchored towards the northern end of the bay protected from swells but only little from winds. Next morning the coast guard inspected our vessel and asked for reasons for our overnight stay as our zarpe indicated Cartagena as next port of call.

Generally it was very important to inform port captain as well as coast guard of all our intentions during our stay in Columbia. Officers have been efficient and friendly and we could start towards Cartagena with a two hours delay. Winds and swells have still been strong, but decreased compared to the previous day.

As we were unsure whether our draft would allow to enter Cartagena via Bocca Grande, we asked the port captain for advise and thereafter entered the city via the main channel Bocca Chicca. We anchored just before midnight in the inner habour in front of the club nautico in 10m over mud well protected with no winds and swell at all. 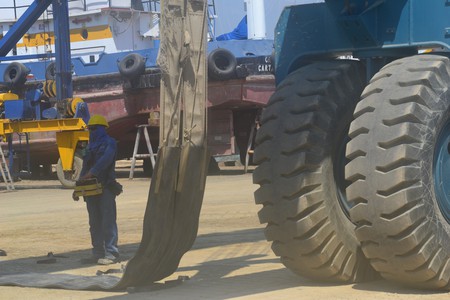 After exploring the unique historical center of Cartagena, we hauled out at Ferroalquimar a few miles south of the inner harbour. Staff was very professional and well organised. Paint as well as some marine spare parts could be obtained closeby, thus we completed work within a few days and hauled in after 5 days on the hard. During our time on the hard our genoa was repaired, but work was not done to our satisfaction, which was not totally surprising as we could not get any recommendations for a sail maker from locals. Retrospectively, we learned that in Colon and Portobello (Panama) more qualified sail makers are available. We also looked for new batteries in columbia, but selection was limited, thus delayed our purchase to Panama.

After provisioning with fresh produce at the mercado de Bazurto and outbound clearance we left for San Blas, Panama. Inbound and outbound clearance in columbia requires obligatory support of an agent, as does obtaining zarpes for domestic travels. As Santa Martha marina was serving as an agent, we didn’t have to pay extra agent fees in Santa Martha, in Cartagena we payed 60 USD for getting our passboards stamped and the zarpe to panama. As we were staying in the country more than 5 days we needed to get a temporary import permit (priced: 110 USD) from local customs. Again this was managed by Santa Martha Marina with a turn around time of a bit less than a week.

We very much enjoyed our stay in Columbia with vibrant cities, breathtaking nature and great people. Speaking only very little Spanish sometimes was a bit of a challenge but eventually communication always worked.