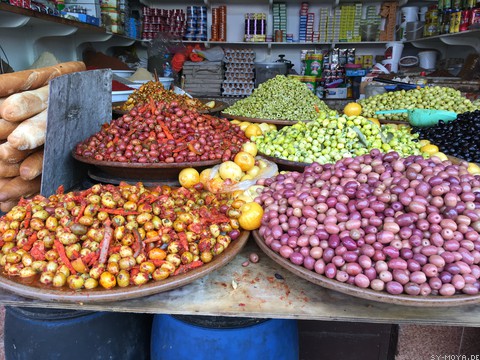 Instead of going along the main cruising route straight to the canary islands, we left the Algarve Portugal mid September 2017 cruising and exploring the Atlantic coast of Morocco. We, a family of 4 with two little boys (aged 2 and 4), started from Portimao with a 2 days/2 nights sail across the bay of Gibraltar and made landfall in Mohamedia in the absence of a functional Marina in Casablanca. On our way heading south along the Moroccan coast we visited the fisher harbors El Jadida and Essouira by boat as well as Casablanca and Marrakech by public transportation before crossing to Lanzarote. Sailing conditions throughout the route have been good with little swell from NW, mostly light winds from the north and a south going current. Despite the utmost complete lack of sailing infrastructure in the visited ports, we very much enjoyed the visit on the African continent, with it's amazing cultural heritage, super friendly people and delicious dishes. We have always been welcomed warmly and did not encounter any issues with regard to safety, refugees or officials. 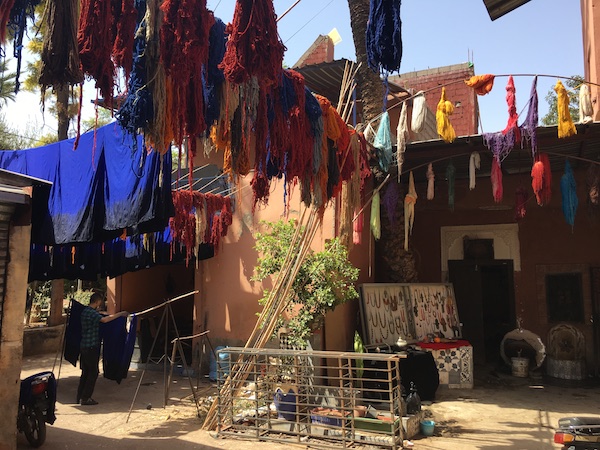 Before entering moroccan waters, we hoisted the curtesy flag as well as the Q flag, the Q flag needed to been flown at each visiting port. After arrival officials either visited Moya or we visited the immigration office, customs as well as port control. As clearance procedures were differing between the individual ports, refer to the individual ports section below for details. In all ports full immigration was performed and clearance needed to be obtained prior to departure, thus passports quickly filled with Moroccan stamps. Despite visiting 3 separate officials and not speaking French inbound clearance worked in all ports effectively and took us 1-2 hrs (only the captain, crew remained on board) with outbound clearance performed much faster. Please note ship papers often are retained in the port and officials do not accept copies. Our port of entry was Mohamedia, were Customs was supposed to issue a blue form detailing our customs declaration, which should have been traveling with us until we leave the country. Prior to leaving Mohamedia we asked for the form but have been ensured that we were ready to proceed, thus never received it. In the later ports we have been asked for the form, but officials accepted our explanations without any issues and cleared us to proceed. Throughout the ports, all officials had been very nice, relaxed and communicative though many of them only spoke little English. In and Outbound Clearance was free of charge, in all ports we only payed berthing (25-35 Euros/night).

We have not been asked to pay baksheesh by any official, not did we have the impression that we were supposed to pay. In Mohamedia the immigration officer visited Moya for outbound clearance. We considered whether he might expect baksheesh and offered a tip, which he refused with the words "this is only my job". Twice we have been asked for a bottle of wine by people who helped us with the lines, which we gladly offered.

We did not encounter any refugees, not did we feel unsafe at any time. We always locked Moya and did not wear jewelry, but did not have any other safety prevention. People have been welcoming us truly warmly. For example, as we approached El Jadida at sun rise, I was sitting in the cockpit for lookout, as a waving fisherman in a very small boat came close to Moya, only to welcome us with a huge grin and recommended best approach to the port. Sailing

We visited Morocco from mid September to the beginning of October 2017. During this time swell was always low to moderate from the north west. We had mostly light winds from the north, we have been sufficient for easy and pleasant sails along the coast (twice with a light wind sail). The south going current did help too. During our stay in Essouira winds according to our grib files did increase to 25-30 knots, but in the harbor we experienced much less. At the beginning of October we left for the canary islands, again the winds and swell have been light from the north.

Before heading into Morocco we red about abundant unlit fishing nets along the coast, which might cause some hazards if one gets tangled. According to respective source fishing nets can be found even in water depths up to 100 meters, which can be more than 20 Miles off the coast. We specifically looked for these nets during daytime and also observed a few in close proximity to the ports of Mohamedia, El Jadida and Essouira. Also in our experience nets are unlit and also not easy to spot during daytime, however nets were much fewer as expected (not more than at the Spanish and Portuguese Atlantic coast) and in our experience were only occurring in more sallow areas. During night time we traveled in water depths of more than 50 meters, mostly approximately 5 to 10 Miles of the coast and did not have any issue.

There are only a few ports down the Atlantic coast of Morocco, thus traveling distances between the ports are significant. As we came from Portimao from the Algarve we did not visit Tangier or Rabat but headed straight to Mohamedia. As next port we traveled 72 nm to reach the next harbor El Jadida in the absence of a functional Marina in Casablanca. We skipped Safi (approximately 90 miles from El Jadida) and headed straight to Essouira (137 miles from El Jadida). As traveling times would have meant very long day passages, we did all passages over night and approached the ports after sun rise, which worked perfectly fine for us. Anchoring in between the ports is only possible if a permit is received from the authorities, though opportunities along the unsheltered coast are few in any case.

We bought fruits and vegetables at the fresh producing markets in the medinas of Mohamedia, El Jadida and Essouira. In Mohamedia there is also a well sorted Carrefour supermarket close to the mosque. In Essouira there is a big supermarket at the end of town, which a neighbor yacht used to stock up prior to going to the canaries. We felt that grocery prices in Morocco were generally a bit lower as compared to Europe but not totally cheap.

In Mohamedia there is in principal the possibility to get some fuel, however as Moya has a significant draught of 1.9 meter, we could not access the fueling pontoon at half tide. As we wanted to get 400 Liters fuel we did not wanted to bother with cans, which could have been organized by the marina. In El Jadida and Essouira there was no obvious fueling station, but we did not ask if something could be arranged. 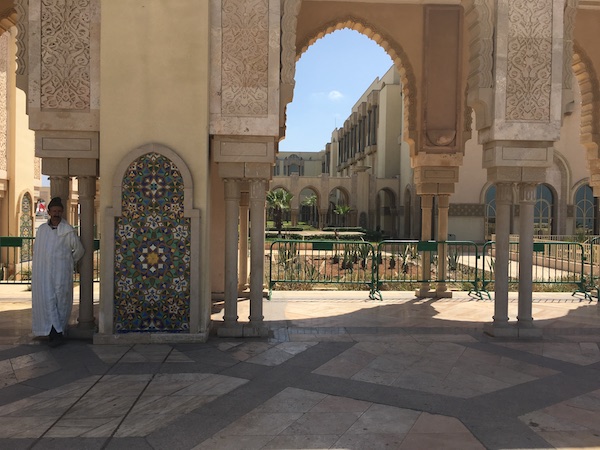 The marina in Casablanca should have been completed in 2015, but at the time of traveling we were not sure about the completion status, thus headed to Mohamedia instead. We visited Casablanca by train, which runs regularly several times a day and takes only 30 min to the old town of Casablanca. Casablanca is the major commercial center of Morocco with a huge cultural heritage including the impressive Hassan II Mosque, thus we enjoyed the day. We also visited the construction site of the marina, which actually strongly exceeds only a marina but rather builds a whole new waterfront, which according to estimates by locals take at least 2 more years until completion.

Mohamedia is a port of entry which is well lit and we think is safe to approach also in heavy weather. It has a small Marina embedded between the fisher harbor and very close to the industry harbor. Actually the tankers bringing oil to Morocco are only lying 50 Meter from the Marina, thus it smells oily. The Marina is not comparable to European standards and is rather shabby and old, but the yachts are tied up safely and the staff is friendly despite not speaking any English. The showers are functional and clean. 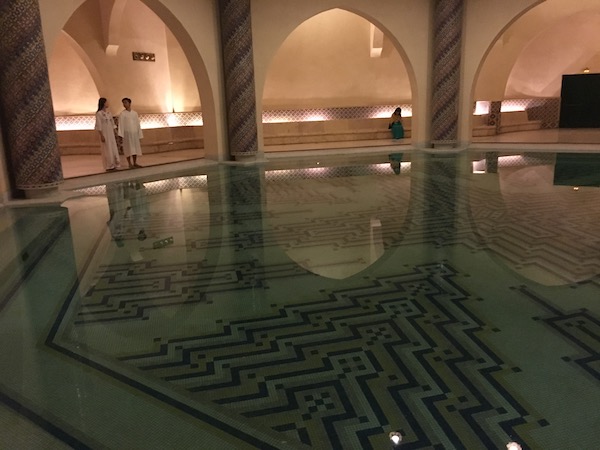 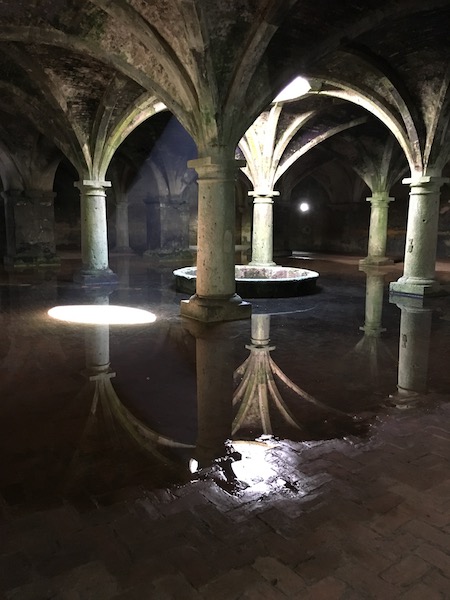 El Jadida is a small fishing harbor, which we approached from the north. On the southern side of the port there was standing surf, thus entry into the harbor at heavy weather might not be safe and one might want to head to the industry port approximately 10nm to the south. In the fishing port of El Jadida, there is a small pontoon on the southern side of the harbor below the Portuguese fortress, where it is possible to tie up for small vessels. The pontoon belongs to the local nautical club. Moya (39ft) was way too large for lying there, thus the only possibility to stay in El Jadida was to stay at anchor in the middle of the harbor. There is only space for few vessels to stay at anchor and the harbor master gives detailed guidance via VHF (channel 12) where exactly to anchor. The complete harbor is monitored by high resolution cameras, thus instructions are very clear and anchor holding is very good in 3 Meter above mud.

The local club has showers but we had not been sure whether we are allowed to use them. Other than that there are no facilities. For inbound clearance we have been picked up by the harbor master, who retained our ship papers and informed the immigration officer. Immigration picked our captain up by car. The immigration office is at the harbor exit to the city, where the paperwork was done. Next door customs needed to be declared. At day of departure we needed to visit immigration, customs as well as port control for outbound clearance. The town of El Jadida besides its massive medina has an old Portuguese village which belongs to the UNESCO world heritage. We have been especially impressed by the old cistern of the fortress. 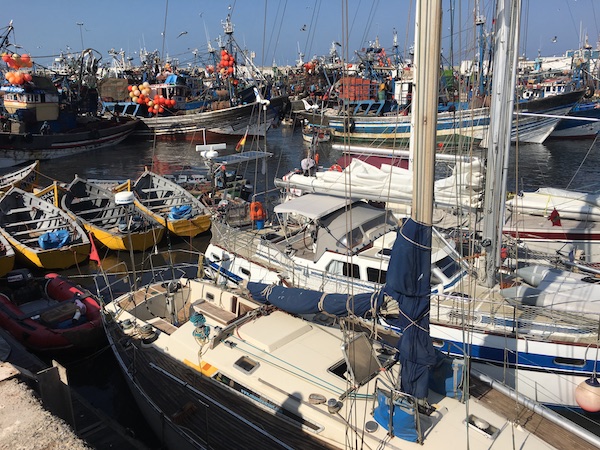 Essouira is a pure fishing port with no yachting facilities at all. The port is not clean and smelly. There is a swimming pontoon on the east side of the harbor, where an old local yacht is permanently tied up. It was possible for us together with two other visiting boats to go along side the yacht and secure Moya directly at land with one or two additional lines. As we visited Essouira there was strong surge inside the fishing harbor and the boats have been moving against each other. Also the harbor was packed with fisher boats, that were hiding from increasing winds. The harbor master did recommend to leave the harbor as fishing vessels sometimes can be rough in maneuvering. Since we did not have any alternatives, we stood in the harbor for 5 days without any issues. For 2 days it would have not been possible to leave as the harbor was cramped with small vessels. We visited the medina of Essouira and strolled through the narrow passages. Also we left Moya for 2 days and one night and visited the amazing city of Marrakech, which is accessible by a 3 hrs bus ride directly from Essouira. 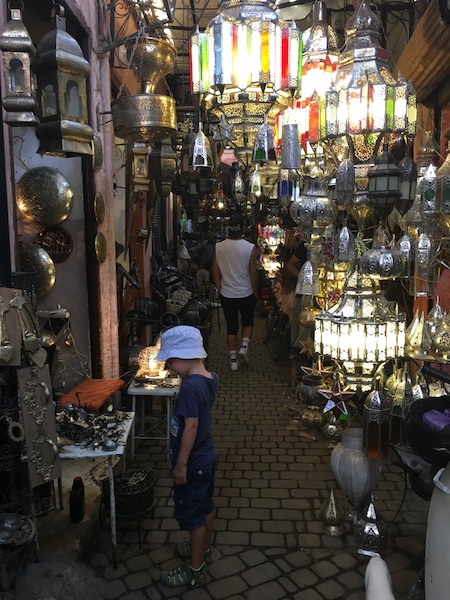 Inbound Clearance in Essouira the Immigration officer picked our captain up and guided him to the Immigration office. After doing the paperwork, Customs (located in the same building) had to be declared. The immigration officer then led us to the local police, who also required crew and ship data and sent us to the port office. In Essouira port fees had to be payed in advance as the port is no longer allowed to retain ship papers. For outbound clearance all four offices had to be visited again. As we left early for the canary islands we received clearance the day before leaving the country.