On board routine on circumnavigation with little kids 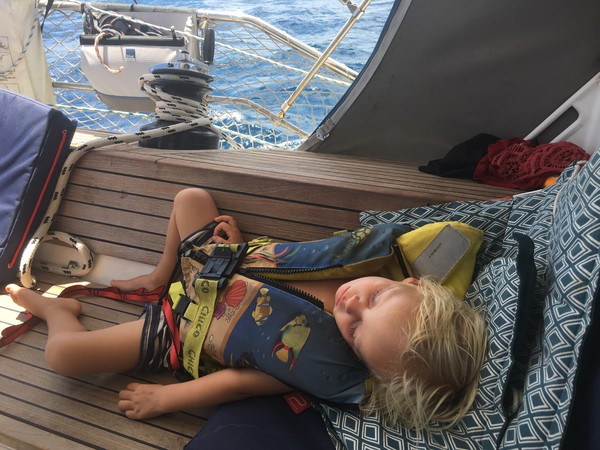 Not only the tide determines the daily routine, but also the kids. During our adult trips we often traveled long distances during the day. We also gave it a try with the little ones first (at that time 3 months and 2.5 years old). For shorter distances, that's not an issue. However, when the kids had spent major part of the day on board at least Joshua was unbalanced. We therefore started with longer hops departing at noon and sail into the night. If the distance was even longer we casted off after dinner and took the children to bed en route. This had the advantage that the two fell asleep very quickly and were safely stored away while we were sailing through the night. The next morning the day belonged to the children.

On board routine with a baby

Retrospectively, I found having a baby on passage was less challenging then I initially thought. As Jonathan was not yet moving, he was happy whenever we were around. While sailing he often was sitting in the cockpit tightly secured in his MaxiCosy or was swinging in his baby crib, which we had set up in the saloon. We didn’t leave the harbor in heavy whether, but as we crossed the English Channel and the Bay of Biscay, we almost always had the wind on Moya’s nose and were going against rough seas. The boat often was tilted and rocking.

At the beginning breast feeding was challenging until I figured out that lying down in a lee berth works well when I was leaning against the hull and Jonathan against myself. Also changing diapers could be tricky while moving. A u-shaped changing mat on our bed worked best to avoid the baby rolling. Christian sometimes had to jump in when I was feeling sick. The smell is really nasty if you feel already a bit sick.

At that time we predominantly tied Moya up in harbours or marinas so we could walk ashore, as I felt a little uneasy when landing ashore with the dingy and the little baby, who was not yet able to sit. We either took our pram to walk around town or our handcart, in which both boys fitted when Joshua was too tired to walk.

On board routine with toddlers 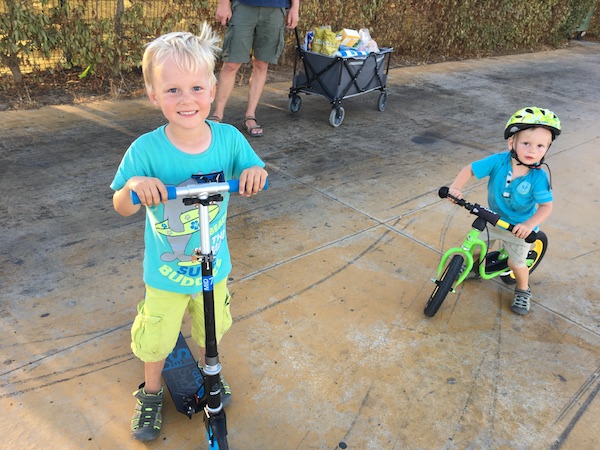 Now we only carry a shoulder strap when going for a hike and have scooters for the city. Shorter distances are easily managed by both of the boys.

As the kids love going by dingy and we are exploring the Caribbean and the South Pacific now, we also changed our habit of going to marinas and most of the time are at anchor, which is much nicer for the boys as they can jump directly into the water when they are getting too hot or energy levels are increasing too much. 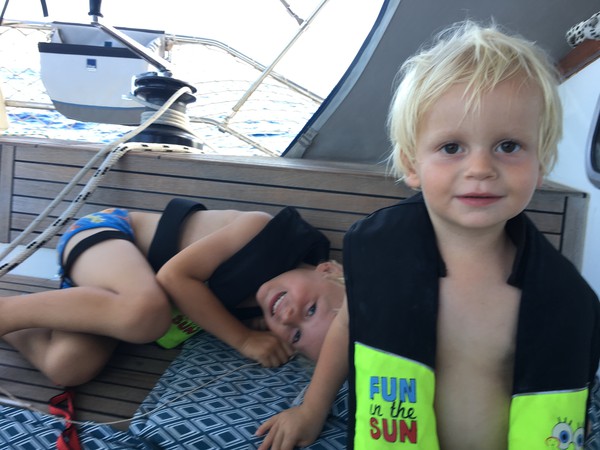 During our Atlantic Crossing, we were 19 days and nights at sea, with little wind and moderate wave. As we crossed the Pacific we even sailed 36 days non stop. The kids quickly got used to the boat routine. They were aware that one of the adults was awake always. At night, Joshua did not call mum or dad but just "who is awake?".

We are very lucky that the boys are not getting sick while at sea, thus we can focus on managing our daily routine. Before we started to cross the Atlantic we discussed back and forth whether to take additional crew on board to get support for the watches and household duties. The tight space on Moya and little privacy on board, plus the fact that we would have had to take a stranger, meant we decided against it and crossed the ocean as a family of four.

During the night that meant the Christian and I were doing the watches in shifts. I went to bed with the kids as soon as the sun set, started my first watch at eleven and my second at five or six in the morning. In the morning the children were awake at sunrise and shared the last night watch before we were having breakfast as a family. 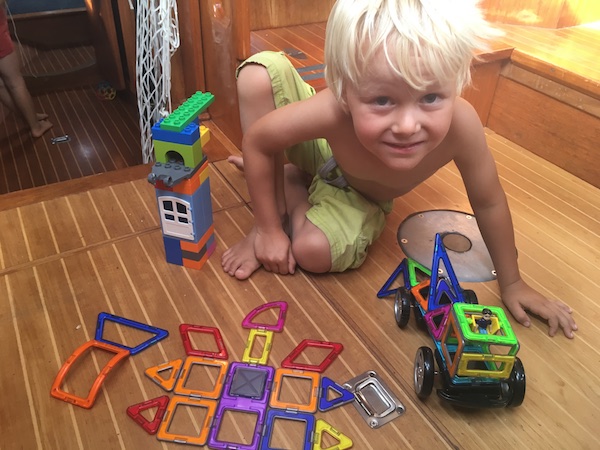 At that time of the day we often played board games or read a book. During the day we had no fixed schedule for the watches. As we were mainly going by wind vane, there was a lot of time to do things between the obligatory lookout for other ships every 10 minutes. Time went by quickly while playing board games, Lego and magnets, coloring, reading, dancing, baking, cooking, washing diapers, fishing, navigating and radioing. When seas were rough the kids started to listen to stories on CD. They also slept, which they wouldn’t do ashore. Luckily they were never scared or had a problem finding sleep. I always had the impression the kids enjoyed life at sea.