What are the monthly expenses for cruising? 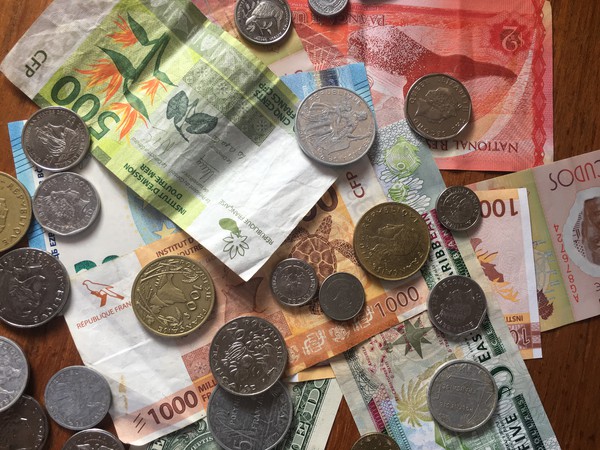 I kept asking myself this question as we planned our sailing trip and tried to figure out how long our savings would last. Nobody likes to talk about money, but everyone asks the same questions. We decided to talk and detail what we have been spending during the last 12 months while cruising the European Atlantic Islands, the Caribbean as well as the Pacific Ocean. Take it with a grain of salt, as cruiser's expenses are heavily variable depending on the crew's budget, boat and needs as well as the cruising region (see also Grocery costs on circumnavigation). Compared to other family cruising boats, we are traveling with a rather small budget, meaning the majority of family boats are spending generally more money, but there are other boats circumnavigating with much less expenses.

On average we spent roughly 2250 euros per month during our first cruising year, corresponding to a monthly budget of 382 euros per person plus 720 euros for Moya.

Monthly expenses fluctuated strongly between 1200 Euro July 2018 and 3800 Euro at the beginning of our trip (September 2017). Fluctuations were not so much based on the differing cruising regions, but more on the fact that we stocked up in certain places and lived on our supplies afterwards. Basically, our expenses decreased throughout the year, as we created large supply stocks and purchased some equipment and spare parts while still in Europe. We also needed to adjust to living on board and figure out our needs while exploring. In any case the decreasing budget trend is by no means reflecting cost of living in the cruising regions. In the Caribbean (December 2017 - March 2018) and in the Pacific (April - August 2018), food, entertainment and spare parts are priced significantly higher as compared to Europe. Expenditure while traveling the South Pacific decreased for the simple reason of lack of opportunity. While you can find restaurants in the Caribbean in almost every bay, there are few places in the Marquesas and Tuamotus.

On average, we invested 32% (about 720 Euros/month) of our budget in Moya. It was the biggest spending block and takes repairs, spare parts and maintenance parts and haul outs (16%), fuel for moya, our dinghy and cooking gas (5%) and insurance (liability plus collision; 11%) into account. Repairs on board are only given to external companies in an emergency. As a rule, we repair defects ourselves. Many boats operate without collision insurance, as this is very expensive, especially outside Europe (more than 300% surcharge in the Pacific compared to Europe). Nevertheless, we did not dare to travel without a hitch, after all Moya is our home at the moment.

Second most, 26% of our budget, we have been spending to purchase food (about 580 Euros/month). We bought non-perishable food in bulk shoppings mainly in Europe and Panama, thus grocery expenses are not constant each month. Fresh produce such as eggs, dairy products, meat, fruits and vegetables we bought freshly in the individual cruising regions (more information under [provisioning] (/ Proviantierung) and [grocery costs] (/Lebensmittelpreise))

11% (about 250 Euros/month) of our expenses was used to explore and for fun stuff. We bought birthday and Christmas gifts, fishing equipment, souvenirs, entrance fees to parks and museums, paid taxi and bus rides, overnight accommodation on land, as well as bicycle and car rental. We did not fly back to Germany or have been off board more than three days in a row.

10% of our budget (about 220 Euros/month) we spent on drinking coffee, eating out or having some ice cream or a sundowner at the beach bar. It was important to us to be able to try some local dishes, thus we have been eating out roughly 2 times a month in a local restaurant. Remaining time we cooked on board. We also made sure to limit expenses in this category, as the daily steaks ashore quickly burns through the budget.

Marina and mooring costs while cruising

An average of 7% (about 150 Euros/month) were our monthly expenses on ports, marinas and moorings. The proportion of the budget dropped from 13% September 2017 to almost zero in the South Pacific where we almost exclusively were lying at anchor. Moya is a relatively small boat with 39 feet, thus mooring fees are much cheaper compared to larger monohulls or catamarans.

An average of 6% (about 145 Euros/month) were our monthly expenses for fees from authorities, cruising permits, agents, visas and canal passages. As far as possible we avoided introducing an agent as paperwork in most cases can be done by the captain or crew as well, which often is much cheaper (see also [Panama canal without agent] (/reviere/panama-canal-transit)). Cruising expenses variied strongly depending on the region we traveled. In many countries expenses for Immigration, Customs and Cruising were reasonable (<30 Euro; Cape Verde, St. Lucia, St. Vincent, Grenadines, Los Roques, Samoa) or none existent (Europa, Französisch Polynesien). In contrast in Columbia, Panama und American Samoa expenses were significant (110-220 Euro), costs for transiting the panama canal were coming on top (ca. 1000 Euro without an agent). Cruising expenses in the pacific Islands Cook und Tonga as well as Grenada are in between (40-60 Euro).

5% (about 120 Euros/month) of our budget, we invested in our health insurance (covering all family members), in medicines and doctor visits. We saved more than 500 Euro compared to our health expenses in Germany.

Approximately 1% (about 30 Euros/month) of our monthly expenses have been spent on data SIM cards, hotspot credits and credit on our satellite phone. As we are obtaining weather data via SSB radio, this proportion is low compared to other cruisers, who usually invest a three-digit amount of money for e-mail via satellite connection.

Spendings on new clothes and washing

Less than 1% (25 Euros/month) we have been spending on new clothes, shoes and for laundry. Please note, that we already took the next size of shirts and shoes on board for the kids when we started our journey. Apart from using launderettes, we often also did small laundry on board.