How to land a fish from a sailboat? 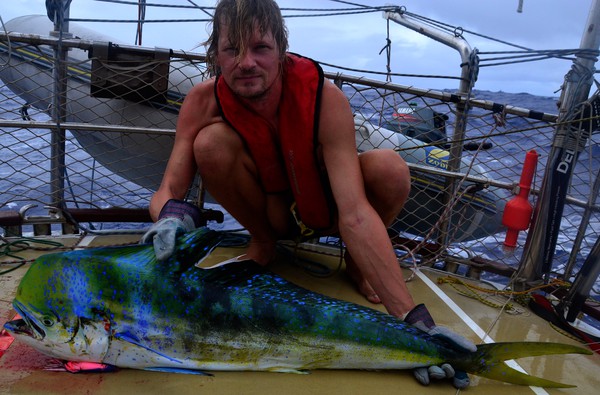 Fishing is tightly connected to bluewater sailing. Almost every cruiser is fishing from time to time. When fruit, vegetables and meat are running out on passage, a landed fish is served for feasting. But how on earth do I land a fish, when I have no clue about fishing?

For us, who never have been in touch with any kind of fishing, landing a fish was the holy grail. We had no idea which fishing tackle, which baits and which hooks are needed to land a fish. Also we didn´t know which fish can be caught and what is important when fishing. Before our bluewater trip, we read some books about fishing, but the issue was, that fishing experts explained how to integrate when we did not even know what the result of 1 plus 1 is. We would have needed someone to teach or a book called "fishing for cruiser dummies", but we did not find one or the other. We now have written up our experience and lessons learned in catching fish in lay language.

Without any idea about fishing, I ordered a fishing rod with a spool from Amazon, a beginner box for fishing at sea, plaited fishing line, plastic China squids to catch tuna and a wire leader, to avoid bigger fish tearing the line. I then followed a steep learning curve:

Fishing Rod & Handline: As it turned out later, I purchased a fishing rod for surf fishing. What I needed was a rod for trolling. The difference between the two rods is that the trolling rod is significantly shorter and more stable than the surf rod. The forces while trolling are much larger than on the beach and you do not have to cast the leash, if you tow the lien behind the boat. Trolling rods usually have a larger spool with a stronger brake to prevent a large, powerful fish from unwinding the entire fishing line. We still use the fishing rod I bought initially to a limited extent, but it's not ideal. First, it bends much stronger when a fish bites and will eventually succumb to the forces of the fish. Also, the brake of the spool is too weak. The brake is located on the spool and is adjustable by a wheel. It should be adjusted so that you hardly can pull the leash out with your hand so that you notice when a fish is biting and it starts to click when the fish pulls out part of the leash. The clicker means "hello, here I am", now is the time to tighten the brake and crank the fish in. On our rod, due to the small spool and the weak brake, big fish manage to pull out the entire line on our spool even when the brake is completely tight. The leash is tied to the roll but does not withstand the dynamic loads, even if it is designed for> 50 lb, and finally tears. Meaning: fish gone, lure gone, leash gone. Therefore, we are now working with tiny lures on the fishing rod with the hope to catch small fish. Often this strategy works, sometimes it doesn´t and a big guy spins everything off.

In order to catch the big ones, we have crafted a handline ourselves. In principle, this is just a long line with a shock absorber at one end and a leader at the other end. Our leash is a 3mm thick, 40 meter long rope on which we knotted a 3 meter long stable monofilament with a swivel and a snap swivel at the end. Shutter and vortex should be saltwater resistant and very stable. In our hands cheap products broke repeatedly, thus we switched to the slightly more expensive items, which are more durable. In the snap swivel we hook the eyelet of the leader, which is connected to the lure. As a shock absorber, we use three transponders that are tied into a leash to dampen the jerk when biting the fish. The shock absorber has a small rope attached to it with a few empty beer cans that act as an alarm system and make noise when a fish bites and tugs on a leash.

Fishing line: We have successfully fished with braided line as well as with monofilament. We could not find any connection that more fish bite with one or the other. To avoid larger fish tearing the leash, we used at least 25 lb of linen. 25 lb does not equal the traction of the weight of the fish, so you can catch larger fish with it.

Lure: We quickly gave up fishing with our China lure. The China squids surfed the water surface and attracted few fish. In cases a fish bit, we couldn´t land it as hooks bent and the fish mostly escaped. We then bought ready-to-go, rather expensive lures in fishing shops and finally switched over to make our lure ourselves. The lures we bought were either squids (yellow, white or pink) or rappala bait fish. We experienced more frequent hits with the squids. Both, we use in small to medium size (approx. 15-20cm) as our target fish are predators of 8-15 kg. Larger fish are harder to land and as we could not eat them anyhow we focus on the smaller ones. In order to save money, we are now crafting lures ourselves. In addition to the leader, you need a crimping tool, the clamping sleeves, lead weights, beads, hooks and the plastic squid hulls.

Hooks: We used triple hooks, single hooks and double hooks. We have not been successful with triple hooks, but these have been of inferior quality. With the single hooks we landed fish, as well as the double hooks. In principle, we had the impression, that more stable hooks land fish more realibly. The hooks we are currently using are quite large (about 8cm), which might attract less fish, but increased the likelihood for landing. Other sailors and fishermen recommended double hooks for trolling, which we also liked best so far.

Leader: Wire is more stable, is less likely to be torn by fish. Monofilament is harder to recognize, thus fish more frequently bite. However, with thin monofilament, our lure were often gone as fast as the fish. Now we are using thick monofilament 1.8 mm diameter, which the fish have not bitten through yet. Probably it will come to that at some point.

Other accessories: As other accessories we require stable, saltwater swirls and swivel snaps, a gaff and gloves to land the fish, a pair of pliers for removing the hook and a filleting knife. We use branded items for the swivel and swivel snaps and prefer more solid items. Cheap snaps in our hands corrode and eventually broke. Since Moya is a center cockpit yacht, our Gaff (a rod with hooks on the front) is 1.5 meters long, in case of stern cockpit yachts a shorter one might be sufficient. We do not use special gloves and pliers and buy them from the hardware store. For the further processing of the first fish, we did not have a filing knife and used a normal kitchen knife to remove skin and fillets, but with a good filing knife this task is accomplished much easier.

At the beginning, we asked ourselves: how many lines do we have to cast out? How deep do we have to troll the lure? At what speed do we have to sail? Do we have to slow down to land the fish? What color and shape must the bait have to land a tuna? Which fish do you actually catch? At which time of the day do fish bite?

And answers to exactly these absolutely trivial questions were not so easy to find in the net and in books.

Our experience is that we need at least 20-30 feet of leash for the fish to bite. Yellow, white and pink squids work best for fishing mahi mahi, barracuda and tuna. The lures must be dragged to the surface of the sea, just under wate. If lure occasionally breaks the water fish bite anyway. Wahoos and maybe other predators should be possible to fish too, bite too, but we didn´t so far. Sharks do not bite artificial lures unless another fish has bitten already and is dragged .

If we sail slowly <4 kts we hardly catch fish, higher speed is favorable. Moya's maximum speed is 7-8 kts, thus we cannot comment if less fish bit at speeds of more than 8 kts. Most of the bites we observed at dawn and dusk. We did not fish at night. During daytime we also had bites, especially with moving water or clouded skies.

For landing we keep the boat speed and always work in pairs. We wear life jackets while working with the lines. One persons pulls the fishing line or handline in. The other person is in charge of the gaff and skewer the fish once it is in reach. When the fish is on board, it will be released with one stitch behind the gills or we will remove the hook with a pair of pliers and throw it back. Then we remove the innards and the head, and then, skin and fillets.

Because of the danger of poisoning by Ciguatera (a toxin that is produced by algae and then accumulates in the food chain and in humans can lead to serious symptoms of poisoning or even death - more on Wikipedia Ciguatera we have not caught and eaten reef fish. Also, the statements of a domestic occurrence of Ciguatera toxin can be misleading, so we were conservative and did no reef fishing. Barracuda is known to enrich Ciguatera toxin by eating reef fish, smaller specimens <90 cm are considered less of a concern than large ones. We have therefore eaten them in areas that were considered Ciguatera-free. Mahi and tuna are not affected to our knowledge by Ciguatera.

Some fish have parasites like worms in their intestines, we did not use them for sushi, but thoroughly cooked them. If parasitic infestation was present in the meat, we did not eat the fish at all.