The ship's log is available in german only. Try Google translator and enjoy the pictures. 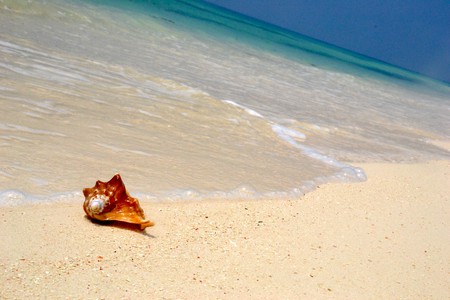 After 24 days at sea we have been on land yesterday. I guess, going ashore wasn’t 100% legal, but the heat on board was hardly bearable. The sun was burning, the air unmoving. We were jumping into the water from the boat and were setting up a little blow up boat the kids were using as mini pool on our aft deck, but it wasn’t the same as playing at the beach. White sandy beaches were waving at us, wildly. On Entaasnu we didn’t see anything apart from water, sand and sea gulls. We finally decided to launch Tilly. The greenish water was crystal clear, even in 5 meters we have been observing fish swimming between bits of coral.

On land, it was hot as well and there was no shade at all. As we were setting up our beach umbrella, a load of rust spoiled over our feet. The statistics now is counting one more victim of the aggressive salt water atmosphere, which was making the umbrella rust from inside. It did it’s job one more time. As we were fighting with the umbrella, the kids were running along the waterline chasing sea gulls. Afterwards we walked along the coast and spotted a thousand hermit crabs, an amazing red crab, wonderful conchs and a huge skull of a bird, maybe of a pelican. Despite wearing swimming shirts and protection factor 50 sun screen, we couldn’t stay long. We were feeling dessert isn’t far.

Late afternoon we pulled our hook deciding to motor during the night. Luckily, almost half of our fuel is left. Now, we are waiting badly for the desired southerly winds. 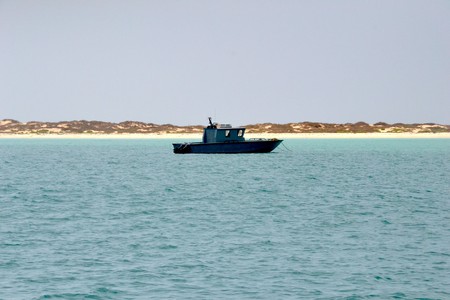 In case you carefully tracked our position, you surely noticed that we already passed Massawa, our initial destination. We didn’t skip Massawa for touristic reasons, the city actually has a dense and interesting history, we continued sailing once again for the weather.

Generally, the macro weather situation in the Red Sea is predictable. During the winter in the southern part southerly winds are prevailing, whereas in the northern part winds are mainly blowing from the north. In between, approximately at the boarder of Eritrea and Sudan, winds are converging resulting in any kind of weather. During the summer, in the whole Red Sea northerly winds are prevailing. In other words head winds if one is traveling northbound. Additionally, a number of local less foreseeable effects are common: the Khamsin is occurring in the northern part and is carrying dust and sand from the Sahara; the Belat is a phenomenon of the southern part, blowing in up to gale force from the arabic peninsula resulting in big seas; the Haboob, a gale force wind, occuring at the Sudanese coast; and the Kharif a northerly wind originating in Somalia. Mildly speaking, the weather in the Red Sea is a real challenge.

Therefore, we are currently trying to make use of the last bits of northerly winds, avoiding the head winds as long as possible. Yesterday, northerly winds were predicted for tomorrow, which is for this longitude and time of the year rather unusual. Thus, we decided to straight head for Suakin in Sudan accepting the downside to cope with our empty pantry. Today, it is rather unclear whether the northerly winds will indeed reach us.

We already sailed to the island of Harmil, seeking for shelter against northerly winds and swells. Our hook barely touched the water surface when a little boat rushed to us. Three man were on board asking for our papers. Apparently, the situation was new to them and they were uncertain what to do with us. Finally, the went away with our documents promising to return. I was a little wary about that from the start, the captain however absolutely relaxed from hair to toe. Just before sunset they finally returned making us move. Harmil is supposed to be a military restricted area, but we were welcome to anchor on the neighbour island Entaasnu, where we are currently located, not so well protected against winds and swell. 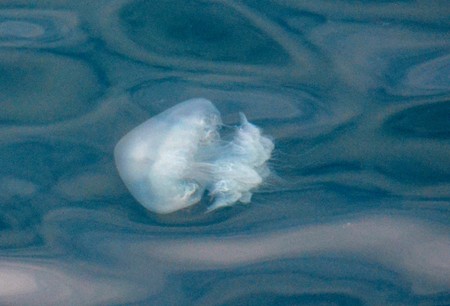 Also for tonight winds directly on the nose have been forecasted. Beating another night into winds and waves were absolutely not appealing. Also, I felt a bit strange. But a good nights sleep and a break at anchor work miracles.

Since early in the morning swarms of black and white birds accompanied Moya. They surrounded her, took a break swimming and again flew just over the top of our mast or of our solar panels. It looked amazing, quite majestic. Joni and myself sat on the reeling for the good part of an hour just watching what they would do next. They wouldn’t leave us the whole day. Maybe they supposed we were a fishing boat loosing fish sooner or later? Late afternoon, we approached the little islands of Mersa Dudo, Eritrea. We chose to anchore here in the shade of Sadla island, protected against northerly winds and swells. A fishing boat was anchoring at our spot already. It was not big, quite small actually, and full to the top with fishing nets, bouys and seven black skinned men in colorful clothes waving at us. They were just lifting their anchor when we were approaching and I stopped pondering about something suitable to give away.

When preparing our anchor I noted large white shapes in the water. At first glance, I thought it must have been jerry cans or plastic bags, but at a closer look I realised white screens pulling some cauliflower like tentacles. There have been hundreds and they were huge, not all of them, but a few of the jelly fish were at least three feet in diameter. I instantly changed plans, swimming with the kids at anchor was out of reach now. We neither couldn’t go ashore as we have not yet cleared in and given the military presence. Therefore, I rather raided my hidden treasures and pulled out ice tea and jelly candy for a little welcome party.

This morning we all have been up and well awake early. Skies are misty. We once again are at sea, northbound, our passage is not yet over.