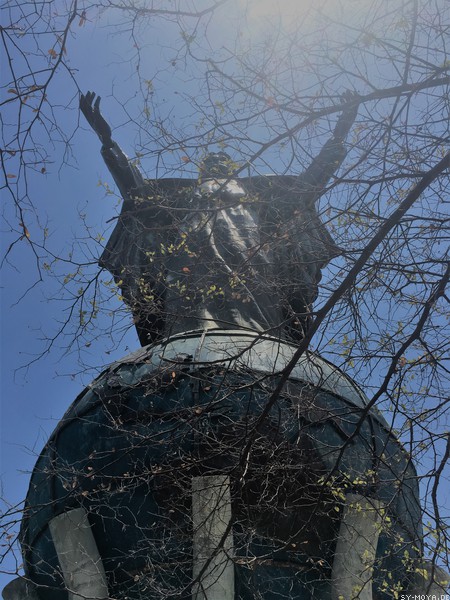 The port of Dili is sheltered behind two large reefs. The entrance to the bay is buoyed and lit. Entry at night might be difficult due to a reef inside the harbour. During our stay the water was very calm. We anchored east of the container terminals close to the small reef in the harbour in 12 meters at 8°33.11' S / 125°34.67' E. The anchor held well and was firmly buried in the mud. There was little wind, but from all directions. After heavy rains, the water in the bay becomes terribly dirty and garbage floats around, washed out of the drainage channels into the sea.

To clear in we landed with the dinghy on the harbor area at the ramp of the roro ferry. There are stones everywhere and there is no dock, so the dockers helped us lifting the dinghy out of the water and putting it ashore. Also otherwise, there seems to be no dingy dock in the city. The locals have long lines connected to their small boats on moorings and pull them to the beach to embark. After clearance, we therefore beached our dingy, pulled her far up considering the tide and secured her at a tree.

We wanted to announce our arrival via radio, but received no response from anybody. We kept going. Entering East Timor is straightforward if you know where to go. Immigration is inside the secured harbour area in a large, run down building within the waterfront, on the first floor. On the balcony officials can be often seen. We visited immigration first and received stamps in the passport and on the crew list. We continued to customs, directly opposite, east of the main entrance of the port. There we filled out an inbound clearance form and have been asked for a copy of our ship's papers and crew list. Last we visited the Harbor Master. His building is located outside the harbor area, opposite the Motael church. The Harbor Master checks the stamped crew list of immigration and keeps the last port clearance, in addition we filled in a short form. We got the impression that the Harbor Master office is the best organized and in control of the whole process.

There is no fuel dock in Dili. Any liquid must therefore be carried in jugs on board, which is a bit cumbersome, especially because there is also no Dingidock. We did not see a gas station in the city center, but some in the western areas of the city near Timor Plaza. By taxi (1-3 USD in the city) or Microlet (about 25 centavos per person, itinerary on www.dilimicrolets.com), one can get there.

We did not find anyone in Dili filling up European or American gas bottles. However, East Timor gas bottles with Indonesian valve without tap, or gas bottles with Australian valve and tap can be purchased. The smallest bottles contain 10kg butane. With a high-pressure hose and a suitable adapter, we refilled our German gas bottles. The hose we already had on board, the adapter we bought after some searching at Klean Gas. Klean Gas has a branch office (named Gino Gas) near the port, but we had to get to the main business of Klean Gas (+670 7723 1057) in the west of the city (-8.5677, 125.5308) to get a suitable adapter (for 7 USD) from their large selection. At the W4 supermarket in the city center (near Burger King) we were able to borrow a gas bottle with Australian thread for one day to refill our bottle ($ 20 deposit plus $ 30 gas). Filling our bottles in Dili was important to us because according to our information filling European gas cylinders in Indonesia is very difficult.

Almost all food supplies were available in one of the numerous supermarkets in Dili. However, for certain products like butter and fresh meat we had to visit several stores. Cream cheese and unsweetened yoghurt we did not get at all. Provisioning in Dili is not cheap, as almost all products are imported. Kmanek and Lita Supermarket we liked best as selection was best. Pateo has great Portuguese products but is expensive. Excellent Portuguese bread is available in almost every market. We bought fresh local fruits and vegetables at the Lecidere market, but there are also imported fruits such as apples, grapes and kiwi in the supermarkets. Milk, wine and beer are relatively expensive everywhere. Cave: some supermarkets do not accept foreign credit cards.

Neither at Timor Plaza nor in town we found a shop selling boat accessories. In Rua Colmera there are some "hardware stores" and shops that sew courtesy flags.

We bought a SIM card from Timor Telekom for 1 USD. With another 5 USD we got a 1.1 GB/two weeks internet plan (but in fact could use 2,7 GB), there are other packages. SIM cards are available at Telekom directly or in the Phonehouse in Timor Plaza or Rua de Comera. Credit is available in every street from the street vendors or at the same stores. Internet connection was great, the fastest since Panama.

East Timor uses USD as currency but has local coins as well, centavos (100 equals 1 USD). At street vendors you can exchange Indonesian rupees. From most ATMs USD can be withdrawn by an international credit card.

In the city we did not find a self service laundry. We took our laundry to Mana Laundry (www.manalaundry.com) around the corner of the Indonesian Embassy. After two days we were informed that laundry was ready. We picked up our things: dry, ironed, folded, wrapped in foil, smelling good and clean again (2 USD/kg, 1 day express service 4 USD/kg).

First step is the Harbor Master for outbound clearance. He calculated the number of days of our stay. After that we were sent with a form to the Paying Agency, 1 week stay in the port area cost 17 USD. At customs, we filled out the outbound form, then immigration stamped our passports. With all receipts we returned to the Harbor Master, who issued the port clearance document.

The Indonesian Embassy in Dili is very accurate. We have been told to require a sponsor letter by an Indonesian citizen also for a 30 days social visa, which is in contrast to all information we found earlier which clearly stated a sponsor letter is only required for a 60 day social visa. We are not sure, whether this uncommon request is special to the embassy in Dili or to the clerk. Prior announcement of the visa application by email is requested, before going to the embassy (imigrasikbridili@gmail.com). Although the website states the opportunity of online visa applications, we have been asked to physically hand in copies of all documents. This is only possible in the morning between 9 and 11 clock. For the submission we needed for each person copies of the ship papers and the crew list, the sponsor letter and ID card of the sponsor, copies of the passport, passport pictures with red background and the double-sided (!) printed, filled out (using a black pen) application form. All documents needed to be submitted at once. The visa costs 50 USD per person. On the third working day it can be picked up in the afternoon between 14 and 16 o'clock. The embassy can only be entered with appropriate clothing such as long pants.

Kym from Dili central Backpackers helps with visa applications including sponsor letters (50 USD per person for the sponsor letter plus fees for application submission). Our visa application according to Kym was supposed to take 3-4 days longer as compared to our actual application we organized ourselves. Passport photos (with red background!) can be gathered at the western end of the Rua de Calmera, in the same street there are also some copy shops. We organized the sponsorship letter via Raymond Lesmana, the organizer of the Sail2Indonesia Rally (raymond@sailtoindonesia.com, 75 USD for all crew members of a ship). He processed our request immediately, the same day we received the letter.

The people on the street are happy to see tourists and smiled at us almost without exception. In some places people spoke little English, but since everyone tried to help, we could sort out everything. Despite long walks with the kids in the different neighborhoods of the city, we felt at no point unsafe during daytime. As for the kids we did not leave the boat during night. Partly we stored our purchases in our absence in the dinghy on the beach, without any issues.