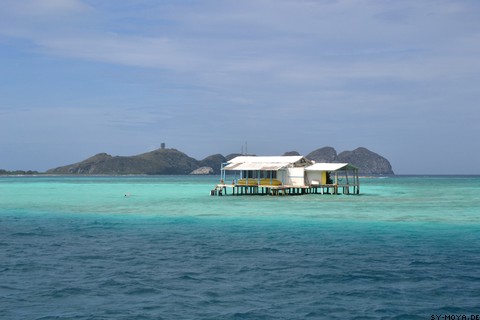 After initial doubts, we - a family of four - decided to visit Los Roques (Venezuela) by boat in January 2018. We enjoyed our stay with breathtaking nature and amazing people, who have been extraordinary helpful without being pushy at the slightest. Locals were well aware of the political situation in Venezuela, but appeared unbothered and relaxed for the area of Los Roques in contrast to the big Venezuelan cities. A three days power outage was an issue for some locals, but many had running generators, which led to the only shortcoming of lack of internet for yachtsmen.Many shops had been closed, but local people appeared to be well supplied and restaurants remained opened.

Locals confirmed our previous internet research that piracy incidents so far had not been experienced on Los Roques. Piracy attacks have been confirmed for the mainland and close to shore islands with a special focus on the eastern part of the country. We have been advised not to travel in respective regions. During passage we held a safety margin of 80 nm to the mainland and travelled with AIS in silence mode. During our visit on the islands, we never felt unsafe and only had positive experiences with locals and officials. Clearance procedure had been mainly straight forward, when following procedures as advised on noonsite. Based on our experience we estimate that inbound clearance can be completed in 2-3 hrs if everything runs smoothly, outbound clearance is much faster. As we had a quick glance in official records and based on the occupancy of anchorages we assume that Grand Roque currently is visited by approximately 5 vessels a week.

We enjoyed our stay a lot and would definitely have spent more time in the archipel if we hadn’t had a fixed private appointment on the ABC islands. We experienced the islands as unspoiled with stunning nature, remote places and amazing people.

Why we decided to visit Los Roques:
A Piracy and Safety assessment

For the current political situation and after studying the piracy reports on noonsite and the caribbean security network we have been hesitant to visit Los Roques, Venezuela, initially. After thorough consideration of our options, we finally decided to spend a few days in the archipel. Here is our thinking prior to visiting the archipel: i) The remote group of islands 80nm north of Caracas have been repeatedly highly recommended by yachtsmen, friends and books mainly for their amazing, unspoilt environment ii) Los Roques is a small community with around 1500 people, therefore the islands are unlikely at the edge of political events (no demonstrations, crowds) iii) The main income of the people living on Los Roques is tourism. Therefore, and as the island community is tiny, people are likely to do their best to avoid violent attacks against tourists, which would be devastating for their future as touristic center vi) To our knowledge so far no piracy related incident report was filed for the cruising area of Los Roques and for open seawaters exceeding 50 nm from the Venezuelan shore v) As most of the reported piracy incidents (mainland and islands close to shore) happened utilizing fast but small, open vessels, we assumed that respective boats would act with limited equipment (no radar) and resources, thus will have difficulties to find a boat on open sea waters on passage to the archipel. For respective reasons and as we were in any case heading west towards the ABC islands, we considered the additional safety risk for our family (2 adults and 2 kids aged 3 and 5) as low when retaining a safety margin for cruising of approximately 80 to 100 nm from the Venezuelan shore and traveling with switched-off AIS transmitter (continued reception of AIS signals from other ships). 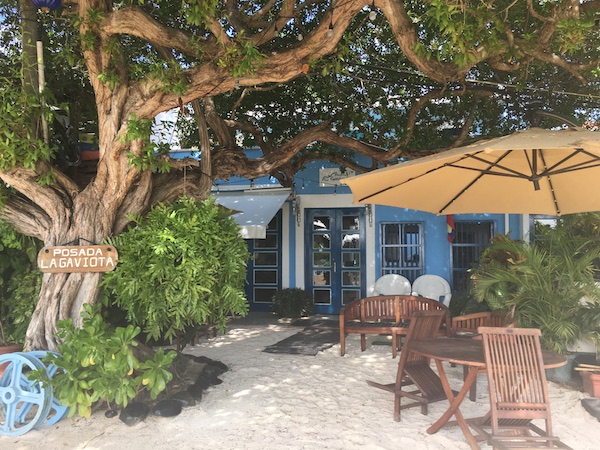 We started our passage in St. George, Grenada at nightfall and directly turned westward. As we left Grenadian waters, we switch off our AIS transmitter and kept a minimum of 80 nm to the mainland of Venezuela. With 20 to 25 knots of easterly winds, approximately 2 meter northeasterly swell and a west going current of roughly one knot we already arrived 48 hrs later at Grand Roque, Venezuela (approx. 8 hrs earlier than expected) and therefore arrived at night, which was not an issue. In the course of the passage we met 2 cargo ships but no other vessels. We, together with 5 other yachts, anchored in front of the coast guard building in 6 Meters over sand. Holding was very good. The anchorage is little protected from easterlies and also is subject to a little swell.

Day 3: Clearing in at Grand Roque 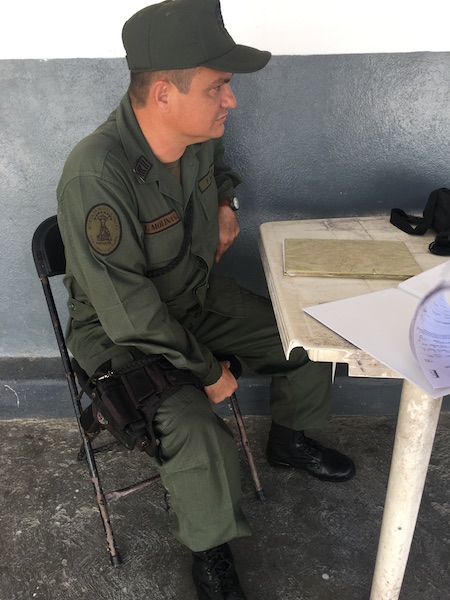 We basically followed the clearance instructions as posted on noonsite, but visited the offices in a different order. We concluded, that it is essential to visit the coastal guard first to pick up the form, which all other agencies are supposed to stamp and the office for payment of fees at last. All other agencies [port control (ANAYA, filing and issuing in and outbound clearance, respectively), immigration (SAIME), national park office (issuing the permit for access in restricted areas of the national park), national guard (collecting ship and personal data in a handwritten book)] can most likely be visited in no predefined order. Most officials spoke no English, except for port control, who at least knew a few words. Speaking Spanish is definitely a plus, but we managed with very little Spanish knowledge and there are local tourist guides available, who gladly help doing the paperwork for a small fee. As we cleared in the country there was an electricity outage, resulting in delays at SAIME who were supposed to copy our passports. We have been asked to complete immigration the following day, but could finish all remaining clearance procedures at the first day. As the electricity outage continued also the next day, they took photos of our passports and issued immigration without taking copies the day after.

Our biggest hurdle in entering Los Roques was the lack of local currency (bolivar) and the fact that national authorities (everyone else does) did not accept USD. As we did not succeed to change USD into bolivar (also not at the pharmacy, which had been specified by previous reports on noonsite), we had been guided to Paul. Paul offered to transfer our national park fees (1.5 Million bolivars for a 15 days cruising permit for 4 persons and a 39 ft vessel) to the fee collection office and ask us to pay him in USD in cash (at a rate of 100000 bolivar for 1 USD, which at that time was approximately half of the black market exchange rate). We gladly agreed and execution of conducted smoothly.

All officials have been very supportive. Paper filing at each office took us approximately 15 minutes, with 5 to 10 minutes walk in between the offices (with 2 little kid). As we walked through town we noticed that the majority of shops has been closed, but restaurants still had sufficient supplies to serve food and drinks. The ones we tried did all accept USD, thus bolivars are only required for the national authorities. We have been told that supply (2 ships each week) from the mainland is still working well, thus assume that trading continues outside of the stores.

Grand Roque is a very nice little town with colourful houses, white sand covered streets and a variety of shops and restaurants. It is most developed from all islands. 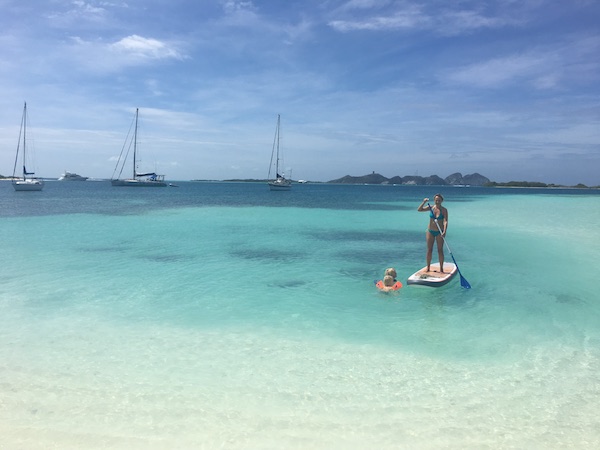 After completion of immigration, we travelled 3 miles northeast to Cayo Francis. Even though access to Cayo Francis is a bit tricky (as one has to pass around several shallow spots which can not be done without local knowledge at night), the anchorage is popular as waters are quiet and are of stunning translucent beauty. Some of our nautical charts have been not accurate for this area, but supported by google earth pictures and eyeball navigation we successfully entered the bay. We passed the most shallow spot (2.5 to 3 Meters) in between several reefs close to the house in the water (picture on first page) and anchored in front of casamarina, the wooden restaurant on the northern side of the bay. Holding again was very good over sand. We enjoyed our stay and have been amazed by the breathtaking colour play in the ocean.

Day 5: Clearing out and Cayo Carenero 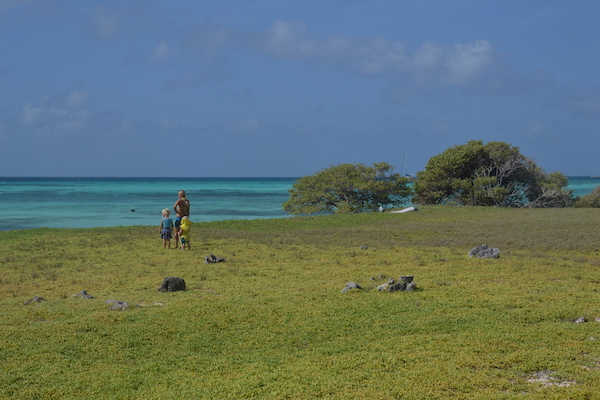 Unfortunately we have been in a bit of a rush, as we had an appointment on Curacao three days later. As we wanted to at least have a brief glance at the downwind cays, we decided to clear out on Grand Roque in the morning and head to Cayo Carenero in the afternoon. For outbound clearance we only visited ANAYA, who issued the Zarpe (clearance document) for the next morning, and Immigration. All together we were ready to depart in approximately 30 minutes. We arrived in Cayo Carenero late afternoon after 15 nm of pleasant downwind sailing and anchored on the west side of the island as waters on the eastern side have been too shallow. Cayo Carenero is a long island which is only a few meters wide. There are a few fisher houses on the eastern corner, otherwise the island is inhabited by animals only. Between mangroves and coral pieces there are a few spots of white beach, which after visiting Cayo Francis did not attract us for a swim. The island is sheltering the south bays from northerly swells, thus the anchorage was quiet with only little swells. We have been the only sailing vessel in the anchorage. 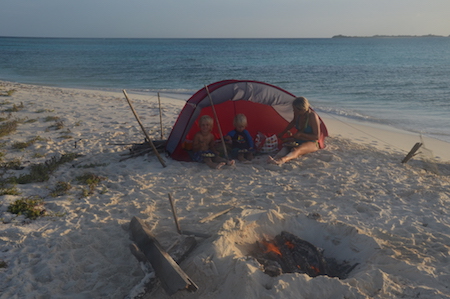 Despite having cleared out already, we stood one more day in the archipel and headed 8nm westward to Cayo de Aqua, the most western islands. Cayo de Aqua are a total of 4 remote, totally unspoilt islands, all of which are non inhabited. The islands are forming a lagoon. There are a few shallow spots in the lagoon, thus access is only possible during the day. We worked our way carefully in the lagoon and anchored at the northeastern side in 4 meters over sand. Holding again was excellent. We have been the only visitor in the lagoon during that night, but 2 yachts arrived next morning.

After exploring Cayo de Aqua and enjoying the beauty of remote white sandy beaches and translucent aquamarine waters, we reluctantly left the Los Roques archipel and headed for Curacao. We would have loved to spend more time on the islands, where we meet amazing people and breathtaking nature. The downwind passage (125nm) was a quick ride, which took us less than 24hr with swell, winds and currents pushing Moya ahead.